Do I have to be like a man to not fail in business?

It wasn’t that long ago when career options for women outside of the home included being a teacher, being a nurse, or being a secretary. And it wasn’t until the Equal Credit Opportunity Act of 1974 when women in the United States could get a credit card without having a signature from her husband.

Today more women graduate from college with Bachelor’s Degrees than men. According to the National Center for Education Statistics (NCES), just over 40% of men who enrolled in a four-year college in 2014 graduated after four years compared to nearly 50% of women.

Women have broken through traditionally male dominated professions, like engineering, the corporate world, and even business ownership.

But despite these historic steps forward, in the hearts of many women– often unconscious–lurks the nagging doubt: Do I need to be like a man not to fail in business?

Business success today hinges on being authentic. Whether you are a man or woman the fast track to business failure is trying to be and act like someone you are not.

In confusing times around gender, I encourage you to think less about what body parts you have and more about energy you are operating with.

Masculine energy is linear, initiating, and goal-directed, much like a male’s body.  It’s logical.  It’s about cause and effect. Two plus two is four. It’s about building bridges and balancing your books. It’s exteriorly focused. It’s from God and it is good.

Whether you are biologically male or biologically female, you operate  from a place of  masculine energy and a certain amount of time from a place more of  feminine energy. The percentages vary depending on your personality, temperament, the environment, your life experiences,  modeling, and, yes, the hormones going through your body.

The question isn’t so much, “Do I have to be a man to not fail in business?”, but rather do I have good chemistry.

To have “good chemistry” with whomever you are with, whether that be a romantic relationship or business one, it’s best to understand your unique masculine / feminine energy mix and what is optimal in the arena in which you are trying to compete.

Lots of problems can occur when this energy formula gets out of whack. This can create energy leaks, shutdowns, and crises.

First, you may be a man or woman who rejects learning about and integrating the opposite type of energy. Too much masculine energy will cause you to be pushy, exhausted, and ultimately not effective, because you will be missing out on important relational cues.

Too much feminine energy will leave you paralyzed in emotion and unwilling and unable to take needed action. You will surrender your actions to your emotions and your emotions, in many cases, will be determined by what other people do outside of you. At its extreme too much feminine energy leaves you in a childlike place wanting to receive and be taken care of most of the time. That doesn’t work in the workforce.

In both cases you won’t be getting the energy back from the energy you are putting out. Instead of growing in energy, power, and success, you are leaking.

Second, if you can get past rejecting having the right mix of masculine and feminine energy whether you are a male or female, you might be inserting your authentic self into an incompatible environment.

Demanding that the square peg accept your round hole or pretending there are no issues there when there really are, leads to a frustration which builds into a crisis. Sometimes the only relief is a complete shutdown in the form of a health or personal crisis or even being let go or the big “BF”: business failure. You are drained and  exasperated because you are trying to make reality conform to you rather than you conform to reality.

LIVING AUTHENTICALLY WHILE KNOWING THE RULES AND WHICH ONES TO BREAK

STEP #1:  The first step in being truly successful in business and your life in a holistic way involves personal growth and self-awareness that allows you to live your authentic self most of the time.

STEP #2:  The second step is to know how the world really works. Business is a culmination of math (knowing your numbers), science (understanding cause and effect), philosophy and language (understanding the big picture, where you fit in that, and be able to communicate that effectively), and psychology (working effectively with human persons as they really are).

Whether you are a man or a woman, you really do need to have a grasp of how things really work in the world of business and economics or have someone helping you to figure that out.

STEP #3:  Lastly, once you know yourself and have a realistic grasp of how the world works, you can figure out which rules to break, modify or adapt to fit your unique blend of masculine and feminine energy.

There’s more than one way to skin a cat. You side-step failure by being your authentic self in an effective and well thought out way consistantly. This involves trial and error and recalibration. It can be done. And it doesn’t matter if you are a man or a woman to do it.

APPLICATION IN THE REAL WORLD

For example, they say sales is a numbers game–and to some degree, it is. But that’s not the end of the story.

I know people who speed date at their networking events to collect ten plus business cards of people and put them in their sales funnel. They know that a certain percentage of those contacts will be prospects, and a certain number of those prospects will become paying clients.  There’s nothing wrong with that approach.  That really is a more predominant masculine energy approach to getting clients.  There’s nothing wrong with it, if that works for that person.

When I tried to do that, being more feminine energy,  I felt completely exhausted and was not effective. I would have a hard time remembering who I actually talked to.  Approaching people in a mechanical way to follow up did not feel right to the relationally-oriented me. So I ended up feeling and being overwhelmed and didn’t have good results.

What worked is working with who I am in the context of reality.

Rather than approach a networking event trying to collect a certain number of business cards, etc., I came in with an “intention” of connecting with three or so high quality contacts that God wanted me to serve.

I showed up in the best mind space I could and as organized as put together that felt right.  I had a quality versus quantity approach and spent more time getting to the fewer number of people at the event. After my conversations, I would have a better sense of who would be good to follow up with.  I would have fewer prospects, meetings, and follow ups, but I ended up with a higher conversion rate.

So I made the math work, but I did it in a way that was more authentic to who I really am.

God wants every one of us to thrive. He gives us all paths uniquely suited for the exact kind of success that we desire. We are exactly who we need to be to get on that path. The more proactive, self-aware, and authentic we are in our approach, the less likely we will experience business failure. Instead, we likely will make shifts that allow us the optimal alignment for what we want to manifest in our personal and professional lives.

Christian Entrepreneur’s Biz and Life Tips:  If you are being inauthentic in how you are pursuing “success” you won’t enjoy it once you get there anyway, so be who you are from the start. 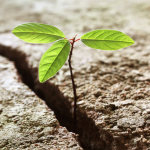