Financing the ‘Great Commission’: An Interview with Aaron Kim

Our guest in this episode is an international financier and author of “Pursued by the Maker: A Global Citizen’s Journey into the Heart of God”.

Aaron Kim is a born-again Christian, a husband, a father of four, and a modern-day renaissance man. A Korean born in Germany, Aaron is a polyglot who lived in more than 10 countries before the age of 30.

His life journey began with a spiritual seed sown by his grandmother. Growing up, Aaron was influenced by diverse cultures and international education spanning three continents learning several languages. He then started a career with the leading global financial institutions on Wall Street, Hong Kong, and Singapore. Two decades later, as a seasoned financial professional, Aaron set up Kairos Capital in Singapore as a response to God who relentlessly pursued him with a calling, Aaron’s purpose in life is to finance the Great Commission.

Check out this episode! 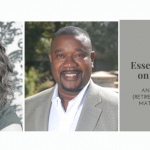 Financing the ‘Great Commission’: An Interview with Aaron KimPodcast